LUCKNOW: Every day, the Uttar Pradesh government sets a new record in its fight against Covid-19. The UP government, led by Yogi Adityanath, has become the first in the country to reach the 5 crore corona vaccination mark.

Furthermore, on Tuesday (August 3, 2021), the state administered vaccines to 26,03,631 people. With this, Uttar Pradesh has broken Madhya Pradesh’s record. The second state on the Co-WIN site’s list was Maharashtra, which was far behind with just over 2.21 lakh doses on Tuesday. The total figure for the state was more than 4.52 crore. Gujarat and Rajasthan are next, with 3.44 crore and 3.36 crore vaccine doses administered, respectively.

Yogi Adityanath, the Chief Minister of Uttar Pradesh, took to Twitter on Tuesday to congratulate the government and the people of the state on reaching the milestone of 26 lakh doses. He thanked Prime Minister Narendra Modi for his leadership and the active participation of the people of the state, without which this milestone would not have been possible. He concluded his post by reminding people that the coronavirus vaccine is their only ‘protective shield’ against the deadly pandemic. 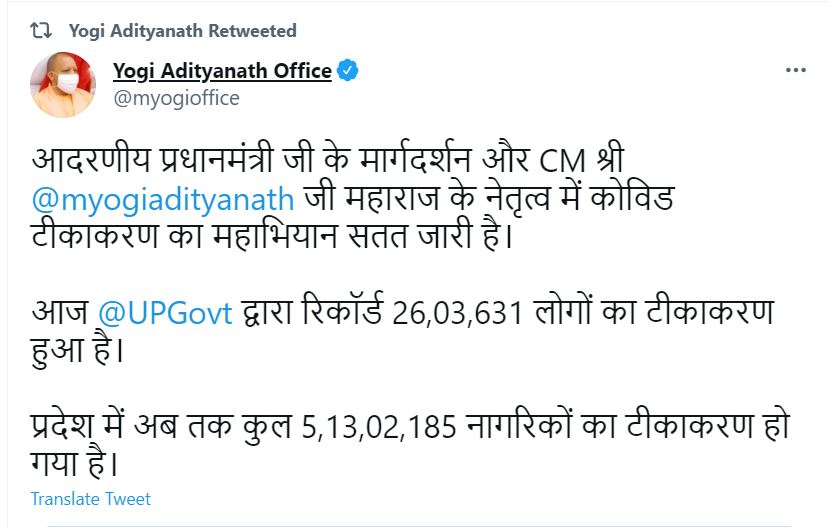 According to health sources, CM Yogi Adityanath has been monitoring the vaccination program’s hourly progress since the morning.

The state government issued new directives to boost the immunisation drive. Yogi Adityanath instructed at a high-level Covid-19 review meeting that “every action necessary should be taken to increase the daily vaccination capacity.”

He also directed that the current vaccination capacity be increased threefold within a month.