LUCKNOW: During the inauguration of the Saryu Nahar National Project in Balrampur, Uttar Pradesh Chief Minister Yogi Adityanath said the project was approved five decades ago in 1972 but never saw the light of day.

Prime Minister Narendra Modi inaugurated the 9,800-crore Saryu Nahar National Project, which has been stalled for the previous 40 years, at Balrampur, Uttar Pradesh, on Saturday with the touch of a button.

Speaking at the launch of the Saryu Nahar National Project. Watch. https://t.co/d0tNpdM8kk

Despite being inaugurated in 1972, the year he was born, he claims the project is still unfinished. In Balrampur, Yogi Adityanath said, “I grew up but it never got done.”

On December 7, the state government unveiled projects worth a total of Rs 10,000, according to the UP chief minister.

He added that the state government also opened nine medical institutions in Siddharthnagar and one international airport in Kushinagar, in addition to these developments.

According to the UP CM, the majority of these projects have been completed, which will boost farmers’ income. “17 of the 18 UP projects have been finished,” CM Yogi Adityanath said, adding that “nine districts of the state, spanning about 15 lakh hectares of land, have now found a great avenue for irrigation, doubling the income of farmers.” 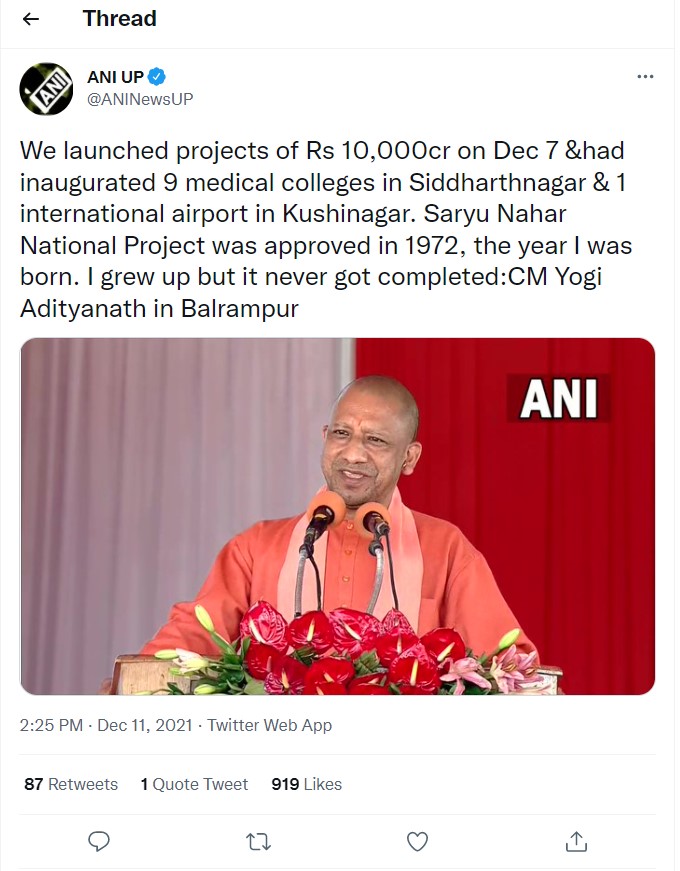 Earlier, Prime Minister Modi inaugurated the Saryu Nahar National Project in Balrampur. “We will make India much more powerful and rich,” he declared.

According to an official statement made by the PMO, work on the project began in 1978, but due to a lack of continuity in budgetary support, interdepartmental coordination, and sufficient monitoring, it was postponed and was not completed even after more than four decades. As a result, the project was transferred to the Pradhan Mantri Krishi Sinchayee Yojana in 2016, with the goal of completing it on schedule.

The Saryu Nahar National Project has a total cost of more than Rs 9,800 crore, of which more than Rs 4,600 crore has been budgeted in the last four years. The project also includes the interconnection of five rivers – Ghaghara, Saryu, Rapti, Banganga, and Rohini – to ensure the best use of the region’s water resources.

According to the PMO statement, the project will provide guaranteed water for irrigation of over 14 lakh hectares of land and help about 29 lakh farmers from over 6200 communities. It will help nine Eastern Uttar Pradesh districts: Bahraich, Shravasti, Balrampur, Gonda, Siddharthnagar, Basti, Sant Kabir Nagar, Gorakhpur, and Maharajganj.

The following are the highlights of the Saryu Nahar National Project: